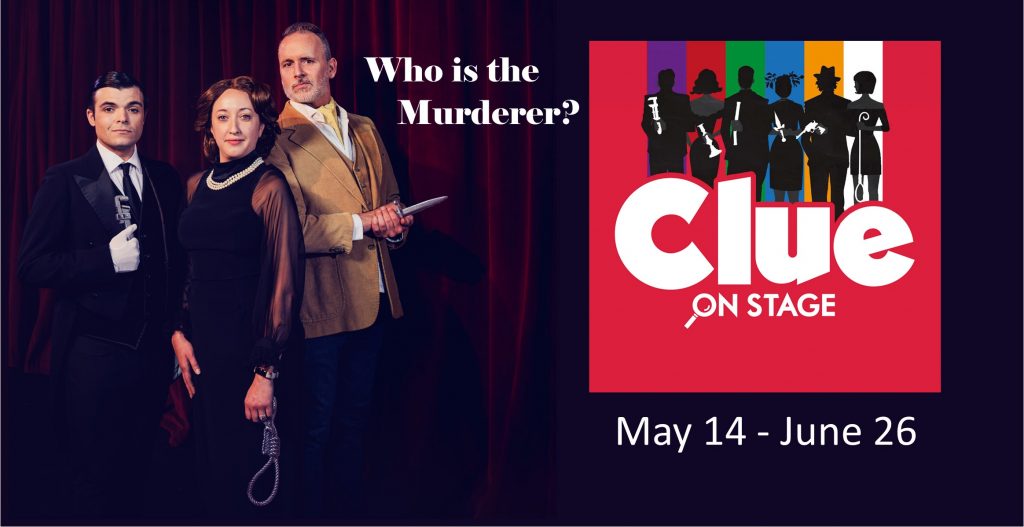 CLUE is the hilarious who-dunnit based on the board game! 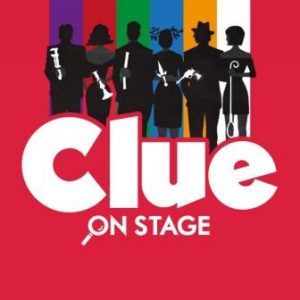 Mrs. Peacock in the ballroom with the candlestick? Colonel Mustard in the study with the knife? Six guests are invited to a dinner party where murder and blackmail are on the menu. When their host turns up dead, they all become suspects. Led by Wadsworth the butler, Miss Scarlett, Professor Plum, Mrs. White, Mr. Green, Mrs. Peacock, and Colonel Mustard race to find the killer as the body count stacks up. CLUE is a hilarious farce-meets-murder mystery that will leave both cult-fans and newcomers in stitches as they try to figure out…WHO did it, WHERE, and with WHAT! 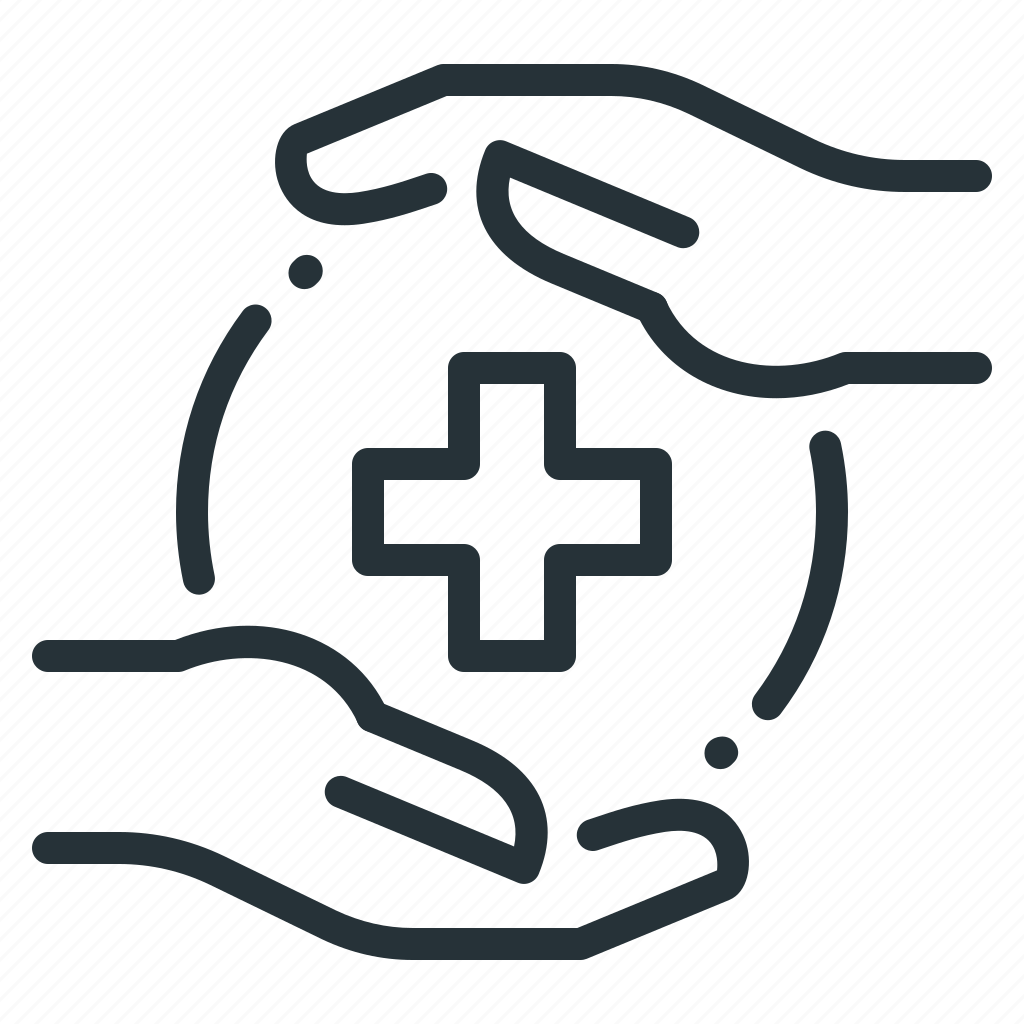 Proof of vaccination or a negative test, plus a mask when not seated will be required. Click here for more information on safety measures.

All tickets for Candlelight include a delicious meal (LEARN MORE), served to your table (we no longer have a buffet) and a full-service cash bar is available (cards accepted).

MEET THE CREATIVE TEAM OF CLUE ON STAGE

JONATHAN LYNN has directed 10 feature films including the cult classic Clue (he also wrote the screenplay), Nuns on the Run (also written by Mr. Lynn), My Cousin Vinny, The Distinguished Gentleman, Sgt. Bilko, Greedy, Trial and Error, The Whole Nine Yards, The Fighting Temptations and most recently, Wild Target. His first produced screenplay was The Internecine Project (1974). For television, Jonathan’s writing credits include dozens of episodes of various comedy series, but he is best known for the phenomenally successful, multi-award-winning BBC series Yes Minister and Yes, Prime Minister, co- written and created with Antony Jay.

Jonathan authored the bestselling books The Complete Yes, Minister and The Complete Yes, Prime Minister, which cumulatively sold more than a million copies in hardback and have been translated into numerous languages and are still in print nearly 30 years later. His novel Mayday (1991) is being re-published by Endeavour Press and his latest books Comedy Rules (Faber and Faber) and Samaritans (Endeavour) both received rave reviews. About Samaritans, the Sunday Times said: “This is a book George Orwell would have approved of.”

Jonathan made his first professional appearance on Broadway in the revue Cambridge Circus, and his television debut on The Ed Sullivan Show, live with 70 million viewers, both at the age of 21. Jonathan’s West End theatre debut, aged 23, was as an actor in the role of “Motel, the Tailor” in the original London cast of Fiddler on the Roof. His subsequent London directing credits include: The Glass Menagerie; Songbook (Best Musical, Olivier Award and Evening Standard Award); Anna Christie (RSC, Stratford and the Donmar Warehouse, Joe Orton’s Loot; Pass the Butler by Eric Idle, Shaw’s Arms and the Man and The Gingerbread Man (Old Vic).  At the National Theatre, he directed A Little Hotel on the Side by Georges Feydeau and Three Men on a Horse (Olivier Award, Best Comedy). As Artistic Director of the Cambridge Theatre Company, he directed 20 productions, producing 20 others, 9 of which transferred to the West End.

His numerous awards include the BAFTA Writers Award, Writers Guild (twice), Broadcasting Press Guild (twice), NAACP Image Award, Environmental Media Award, Ace Award –Best Comedy Series on US cable, and a Special Award from the Campaign for Freedom of Information. Lynn received an MA in Law from Cambridge University and now lives in New York, describing himself as a recovering lawyer.

SANDY RUSTIN (writer) https://www.sandyrustin.com/about is an actress and award-winning playwright. Her comedy, The Cottage, (“Laugh Out Loud!” – The NY Times) was recently presented by Manhattan Theatre Club with Jason Alexander (Seinfeld) directing and is in development for an upcoming commercial production in New York. Her sketch comedy musical, Rated P … For Parenthood, (“Wistfully Funny!” – The NY Times) opened Off-Broadway at the Westside Theatre and was optioned for TV development with ABC Studios, Kelly Ripa & Mark Consuelos. Sandy’s play, STRUCK (“A Charming Comedy!” – The NY Times) enjoyed two recent, critically acclaimed productions at NJ REP and Theatre Raleigh. Her play, HOUSTON, is the recipient of the New American Musical Award and after a recent workshop in NYC is currently in development for production. Sandy’s newest comedy, ELIJAH, was recently presented as part of Midtown Direct Rep’s 2017 “Theatre in the Parlor” Reading Series and is in development. She created, developed, wrote, and starred in her own show for Nickelodeon (Nick Mom) called Overbooked. And her web series, It’s Complicated, was acquired by Stage17.TV. Sandy has two screenplays and two television pilots in development. (Abrams Artists).

As an actress, Sandy guest starred on Comedy Central’s Inside Amy Schumer and regularly appears at New York’s The Upright Citizen’s Brigade in “Gravid Water” (named “Best Improv Show” by Time Out NY). She has worked with Loopers Unlimited for over 15 years as a voiceover actress, appearing in hundreds of TV shows and films. She is the Founding Co-Artistic Director of Midtown Direct Rep and an advocate for http://cowdenfoundation.org/. Northwestern University graduate. Sandy is a member of ASCAP, SAG, AEA, and the Dramatists Guild and is represented by Abrams Artists.

HUNTER FOSTER (co-writer) http://www.hunterfosterofficial.com/bio_page.html is Artistic Director of Redhouse Arts Center in Syracuse. Previously, he was Artistic Associate at the Bucks County Playhouse where he has directed: Clue: On Stage (World Premiere), Guys and Dolls, Company, Ain’t Misbehavin’, The Buddy Holly Story (2016 and 2017), National Pastime, The Rocky Horror Show (2013, 2014, 2016 and 2017), Summer of ’42, and It’s a Wonderful Life. Other directing credits include: The Foreigner, Cabaret, My Fair Lady (Cape Playhouse), Grease (North Carolina Theatre), Spamalot (Casa Manana); and has directed productions of the Million Dollar Quartet for the Paper Mill Playhouse, Geva Theatre, Ogunquit Playhouse, Gateway Playhouse, and the Westchester Broadway Theatre. He has also directed the NYC workshops of the new musicals, Far from the Madding Crowd and One Hit Wonder, which  made its world premiere at the University of Michigan in the fall of 2017.

As a writer, he co-wrote the stage adaptation of the movie, Clue, and has written the books to two off-Broadway musicals: Jasper in Deadland — which had its world premiere at the Prospect Theater Company in NYC, followed by a successful run at the Fifth Avenue Theatre in Seattle — and Summer of ’42 which opened at the Variety Arts Theatre in New York City, and was nominated for an Outer Critic Award for best new Off-Broadway musical. Other recent book writing credits include The Circus in Winter (Goodspeed Musicals), Clyde and Bonnie: A Folktale (New York Musical Theatre Festival, Aurora Theatre), The Hollow (Signature Theatre) and Blue Ridge Sky.

As an actor, he has appeared on Broadway in The Bridges of Madison County, Hands on a Hardbody, Million Dollar Quartet, The Producers, Little Shop of Horrors (Tony nomination), Urinetown, Les Misérables, Footloose, Grease and King David. Hunter is a graduate of the University of Michigan (BFA in Musical Theatre).

ERIC PRICE (co-writer) has written the lyrics and book to the musicals The Violet Hour, Radioactive, Presto Change-o, Around the World, Hello Out There, The Sixth Borough, and additional material for the stage adaptation of the film Clue. His work has been produced at theaters in New York, around the country, and in Europe. Production experience includes work at such institutions as Manhattan Theatre Club, Roundabout Theatre, Goodman Theatre, The Kennedy Center, Menier Chocolate Factory, Barrington Stage, Symphony Space, Merkin Recital Hall, Minetta Lane Theatre, Audible.com, Joe’s Pub, 54 Below (including solo show), Birdland, the Ravinia Festival, and more.

Eric’s adaptation of Jane Austen’s Emma was commissioned in 2015 and has had over 150 productions around the world.

In addition to his career as a writer, Eric was the longtime assistant to 21-time Tony Award-winning director/producer Hal Prince and worked with him over the course of twelve years on the development of new musicals that premiered in New York, Chicago, Washington DC, London, and Tokyo. He is a member of the Lincoln Center Directors Lab and has degrees in Directing from Indiana University and Musical Theatre Writing from NYU’s Tisch School of the Arts. He has been a Dramatists Guild Fellow, a Eugene O’Neill Theatre Center finalist, and a member of Goodspeed’s Johnny Mercer Writers Colony and the Rhinebeck Writers’ Retreat.

He is an Adjunct Professor of Musical Theatre at Pace University and Molloy College/CAP21. With his collaborator, Will Reynolds, Eric won the 2018 Fred Ebb Award for Musical Theatre Writing.  www.ericpriceonline.com

MICHAEL HOLLAND (composer) is a multi-talented artist with work across the entire musical spectrum. His orchestration and vocal arrangement work can be heard on the 2011 Godspell revival cast recording (co-producer). As a composer and lyricist he has written Horizon Line (Theatre Latté Da, Minneapolis), Hurricane (NYMF), and Believe in Me… a Bigfoot Musical (FringeNYC).

As a performer/arranger/music director he created the multi-award-winning alt-cabaret favorite Gashole! (2001-2013). His orchestrations include Emma! A Pop musical (Stageworks), Disco Party and The Best Christmas Pageant Ever (Playscripts). Recordings include four solo CDs of original music, as well as the world premiere of “Another Day in the Modern World” on The Maury Yeston Songbook (PS Classics).

Meet the Cast of “CLUE” 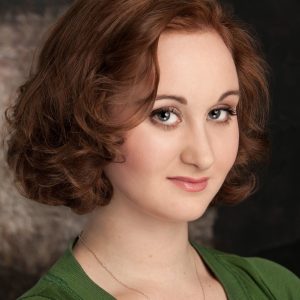 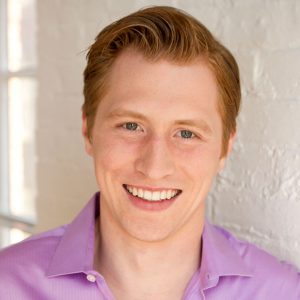 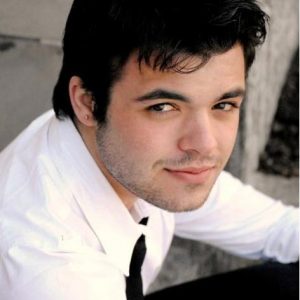 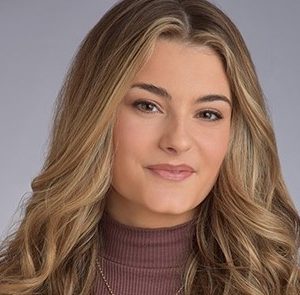 Based on the screenplay by

Based on the Paramount Pictures Motion Picture

Based on the Hasbro board game CLUE